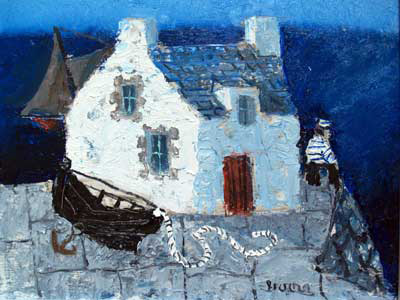 Ever since I was a boy I have been captivated by the magic of painting, those rectangles of color and shapes through which you can enter into the soul of the artist: Van Gogh’s passion, Fra Angelico’s spiritual calm, Gauguin’s sensuality, Picasso’s lust for life. It was those introductions into new worlds that led me at an early age to feel the need to express my own wonder in pictorial terms.

I grew up in a small Scottish town on the edge of the Atlantic where the sound of gulls and surf and boats worked their way into my mythology. I was already an artist by the time I attended the Glasgow School of Art where I graduated in drawing and painting . With little support for an artist in Scotland at that time I moved to London, exhibiting in several galleries while living the life of The Starving Artist. It was in London that I met a New York girl, who had a steady income, married her and we moved to Maine, back to the sea, where I have remained for the past 40 years.

Now my daily routine is an early walk by the sea in Brooklin with my dog, Tam, a Shetland Sheepdog, of course, then into my studio to wrestle with the Angels and hope that the window I create will lead viewers to experience that sense of wonder which has never left me.